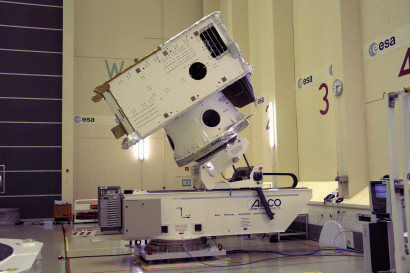 BepiColombo Mercury Transfer Module (MTM) on the M80 test system, which is fitted with its Mass Properties Measurement Adapter (MPMA). The M80/MPMA is located adjacent to the WM50/6 used for the preceding tests, in the 'Hydra' cleanroom at ESA's European Space Research and Technology Centre (ESTEC) in Noordwijk, the Netherlands.

The M80/MPMA was used to determine the position of the module's centre of gravity along its longitudinal (tilted from vertical, in this configuration) axis, and its moments of inertia and products of inertia about all three axes. This was accomplished by having the MPMA tilt and rotate the MTM and move it over the M80; the changing out-of-balance forces exerted as the module is repositioned allow the mass properties to be determined.