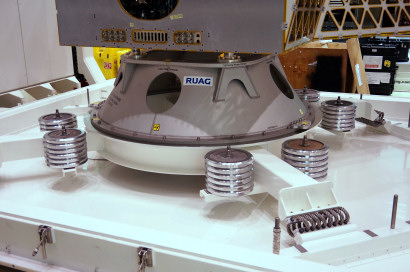 The BepiColombo Mercury Planetary Orbiter (MPO) Proto-Flight Model (PFM) structure hardware arriving at ESA's European Space Research and Technology Centre (ESTEC) in Noordwijk, the Netherlands, in December 2012. It has just travelled from the Stevenage (UK) facility of Astrium, where the chemical propulsion subsystem and the network of surface heat pipes were integrated and tested. Thales Alenia Space will perform further integration of the spacecraft under the direction of the Prime Contractor, Astrium GmbH. The orbiter is packed in a specially built transport container that provided it with protection against vibration and shocks. Here, the shock and vibration protection mechanism can be seen; the flexible couplings between the container base and the spacecraft mounting absorb any shocks that the container experiences. The container is designed to carry the fully integrated spacecraft; to achieve the required mechanical performance with the much lighter primary structure, additional weights have been added to the spacecraft carrier frame.