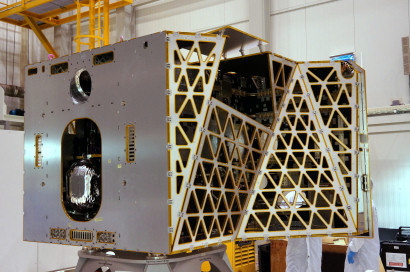 The BepiColombo Mercury Planetary Orbiter (MPO) Proto-Flight Model (PFM) structure hardware arriving at ESA's European Space Research and Technology Centre (ESTEC) in Noordwijk, the Netherlands, in December 2012. It has just travelled from the Stevenage (UK) facility of Astrium, where the chemical propulsion subsystem and the network of surface heat pipes were integrated and tested. Thales Alenia Space will perform further integration of the spacecraft under the direction of the Prime Contractor, Astrium GmbH. One of the propellant tanks, covered with a silver-coloured thermal blanket (actually made of vacuum-deposited aluminium), is visible through the large aperture in the spacecraft face at the left of the image.