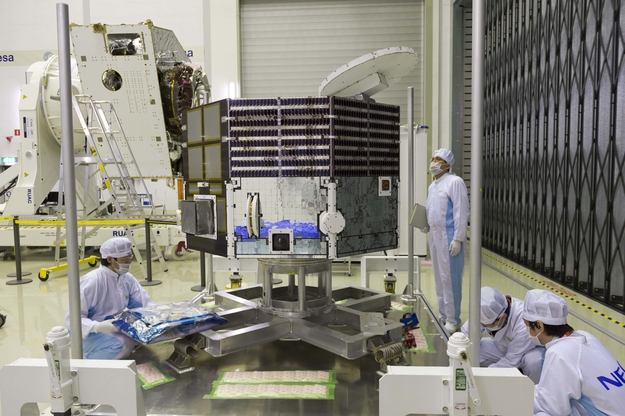 The BepiColombo Mercury Magnetospheric Orbiter (MMO) pictured in a cleanroom at ESA's European Space Research and Technology Centre (ESTEC) in the Netherlands. The MMO arrived there from Japan in April 2015.

The top of the transport container has been removed, and engineers are now preparing to detach the special transport frame, which is mechanically dynamically de-coupled from the base of the container through damper springs. The large disc on top of the spacecraft is the high-gain antenna, which will be used to transmit data back to Earth.

The protoflight model of the Mercury Transfer Module (MTM) is visible in the background. MTM will provide solar-electric propulsion for the spacecraft stack during the journey to Mercury.