BepiColombo sunshield and transfer module at the Spaceport

BepiColombo sunshield and transfer module at the Spaceport 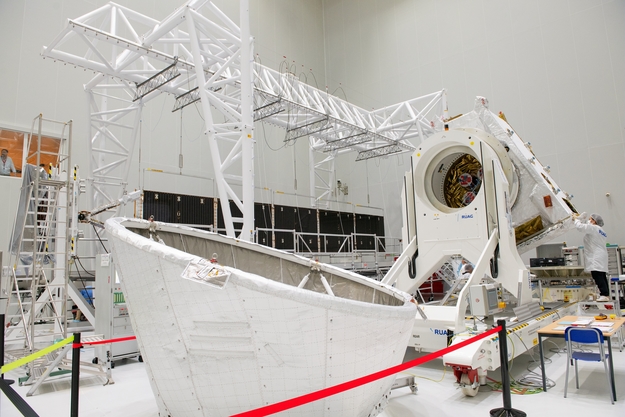 Two elements of the BepiColombo mission during launch preparations at Europe's Spaceport: the Magnetospheric Orbiter Sunshield and Interface Structure (MOSIF) that will protect the JAXA Mercury Magnetospheric Orbiter en route to Mercury is seen here in the foreground, while the ESA Mercury Transfer Module (MTM) that will carry the two orbiters to Mercury is in the background to the right.

The MTM's two long solar panel wings are not yet installed on the module, but one of them can be seen in the background, having just completed a full test deployment as part of the launch preparations.

The ESA-JAXA BepiColombo mission consists of two science orbiters – the Japanese Mercury Magnetospheric Orbiter (MMO) and ESA's Mercury Planetary Orbiter (MPO) – and the MTM, which will use solar electric propulsion to take the two orbiters to Mercury, along with gravity assist flybys at Earth, Venus and Mercury itself.