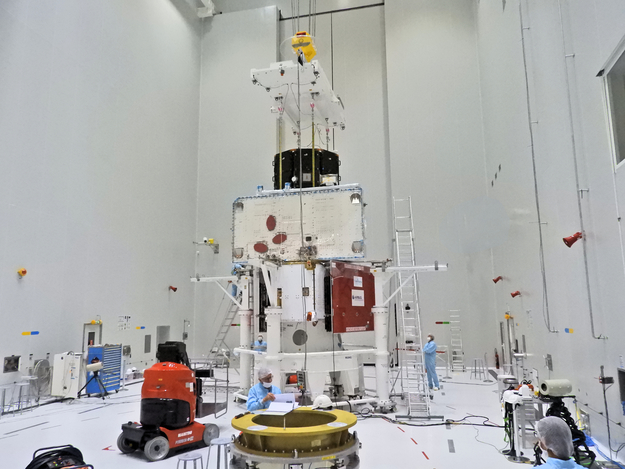 The BepiColombo spacecraft 'stack' is complete. ESA's Mercury Transfer Module sits at the bottom, its two 15 m-long solar arrays folded for launch. It will use a combination of solar electric propulsion, chemical propulsion, and nine gravity assist flybys over seven years to deliver the two science orbiters that sit above, to Mercury.

In the middle of the stack is ESA's Mercury Planetary Orbiter, its 3.7 m wide radiator facing the viewer. The three red oval shapes indicate startrackers, which will be used for navigation.

Most science instruments are mounted on the side of the spacecraft that will point at Mercury – the side clamped against the transfer module during cruise – but some instruments and sensors are located at the main radiator, and the magnetometer boom is folded above.

On top is JAXA's eight-sided Mercury Magnetospheric Orbiter. The sunshield that will protect the module during the cruise phase will be added about a week before launch.

Eight of the 11 instrument suites onboard the Mercury Planetary Orbiter and three out of five on the Mercury Magnetospheric Orbiter can operate or partially operate during the cruise phase, and will take measurements during the two flybys of Venus, for example. Once at Mercury, the two orbiters will operate from different orbits to provide the most detailed study of the innermost planet date, from its interior to surface features, to its interaction with the solar wind.