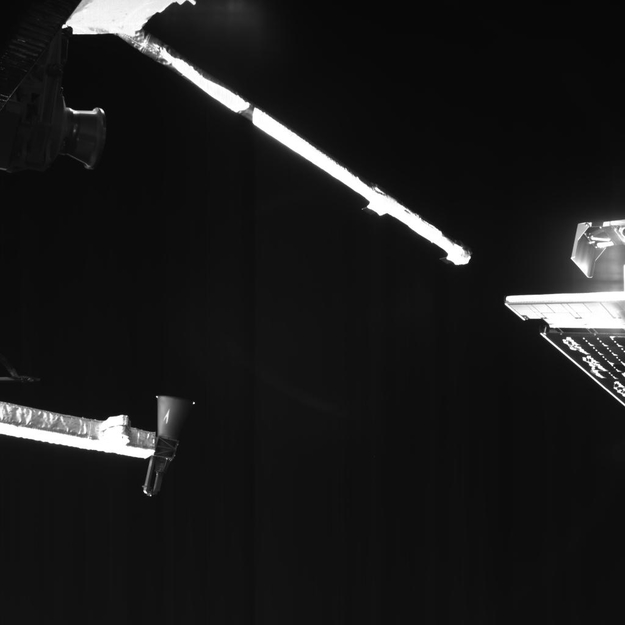 The 2.5 m long boom carrying the magnetometer sensors onboard ESA's BepiColombo Mercury Planetary Orbiter (MPO) has been successfully deployed. The sensors are now prepared to measure the magnetic field on the way to Mercury.

Following launch last weekend, and having completed the 'launch and early orbit phase' on Monday, confirming the spacecraft and systems were healthy and functioning now they are in space, attention has now turned to checking the suite of scientific instruments on the science orbiters.

As part of this activity, one more piece of hardware had to be deployed: the magnetometer boom onboard the MPO. The deployment, which took about one minute to complete, was captured in a series of images taken by one of the monitoring cameras onboard the Mercury Transfer Module (MTM). One image is shown here, with the boom clearly visible in the top part of the image, pointing towards the solar array (right). In this image, the boom is fully deployed (click here to see the full deployment sequence).

The transfer module is equipped with three monitoring cameras – or M-CAMs – which provide black-and-white snapshots in 1024 × 1024 pixel resolution. The magnetometer boom is seen in M-CAM 2. The images were taken with an exposure of 40 milliseconds, and a time interval of six seconds between images, starting at 12:40:09 UTC (14:40:09 CEST) on 25 October. Eleven images were taken in the sequence – eight of them capture the motion of the boom.

At the same time, the sensors in the boom itself recorded the local magnetic field during the deployment.

The M-CAMs already returned space 'selfies' in the days after launch, featuring the MTM's deployed solar wings and MPO's antennas – activities which were confirmed first by telemetry. A portion of the array can be seen towards the right in this orientation, and the cone-shaped medium-gain antenna is in the lower part of the image on the left.

The monitoring cameras will be used at various occasions during the seven year cruise phase. While the MPO is equipped with a high-resolution scientific camera, this can only be operated after separating from the MTM upon arrival at Mercury in late 2025 because, like several of the 11 instrument suites, it is located on the side of the spacecraft fixed to the MTM during cruise.

Once at Mercury, the magnetometer will measure the planet's magnetic field, the interaction of the solar wind, and the formation and dynamics of the magnetosphere – the magnetic 'bubble' around the planet. Together with measurements captured by a similar instrument suite onboard JAXA's Mercury Magnetospheric Orbiter, the spacecraft will provide scientists with data that will help investigate the dynamic environment of the planet, as well as the origin, evolution and current state of the planet's magnetic field and its interior.