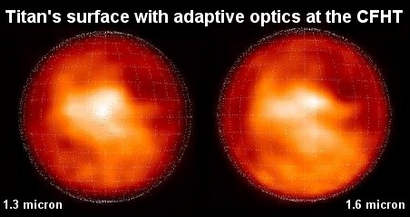 Titan, Saturn's largest moon, attracted astronomers interest because of its thick atmosphere dominated by molecular nitrogen. A complex photochemistry is at play in the stratosphere of Titan producing various organic compounds which make it fully opaque in the visible. Even the close fly-by by Voyager1 could not penetrate this thick veil. Titan's surface was expected to be covered, at least partially, by liquid hydrocarbons in form of lakes or even a global ocean. A very different picture emerged from recent observations in the near-infrared range.
View »
6-Feb-2023 23:18 UT