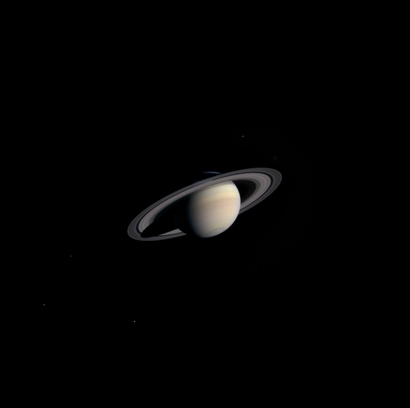 A cold, dusky Saturn looms in the distance in this striking, natural color view of the ringed planet and five of its icy satellites. This image was composed of exposures taken by Cassini's narrow angle camera on 9 November 2003 at 08:54 UTC (spacecraft event time) from a distance of 111.4 million kilometres, about three-fourths the distance of the Earth from the Sun, and 235 days from insertion into Saturn orbit. The smallest features visible here are about 668 kilometres aross, which is a marked improvement over the last Cassini Saturn image released on 1 November 2002. New features such as intricate cloud patterns and small moons near the rings should become visible over the next several months as the spacecraft speeds toward its destination.

Some details within Saturn's massive ring system are already visible. Structure is evident in the B ring, the middle and brightest of Saturn's three main rings. The 4800 kilometre-wide Cassini Division is the distinctive dark, central band that separates the outermost A ring from the brighter B ring. Interestingly, the outer edge of the B ring is maintained by a strong gravitational resonance with the moon Mimas, also visible in this image (see below). The 325 kilometre-wide Encke gap in the A ring, near the outer edge of the ring system, is also visible, as is the fainter C ring, interior to the B ring.

With a thickness of only a few tens of metres or less, the main rings span 274 000 kilometres from one end to the other, about three-quarters of the distance between the Earth and the Moon.

Saturn's multi-banded, multi-hued atmosphere is also apparent at this distance. In this composite made of images taken through broadband blue, green, and red spectral filters, the color is very close to what the human eye would see. The different hues of yellow, brown and red seen in the illuminated southern hemisphere are more delicate and subtle than the colors on Jupiter. Coloration on both Jupiter and Saturn is caused by small colored particles mixed with the white ammonia clouds. The ammonia clouds on Saturn are deeper and thicker than those on Jupiter because ammonia gas condenses at a deeper level in Saturn's colder atmosphere. The composition of the colored particles is not known but is thought to include sulfur and nitrogen as key constituents at middle and low latitudes.

In the southern polar region, a dusky haze is visible, more gray than the light-brown at middle latitudes. This polar haze may be produced by energetic electrons and protons in the aurorae which destroy methane gas, leading to the formation of a haze of complex hydrocarbons.

Most of Saturn's northern hemisphere is in shadow of the rings, with the exception of a small sliver visible on the limb. (Light passing through the Cassini Division illuminates the higher altitudes in the atmosphere.) This sliver appears bluer than the visible southern hemisphere, probably due to molecular scattering by hydrogen at these altitudes above the haze and clouds. As the Cassini tour unfolds over the next five years and beyond, we will have an opportunity to see how the colors change with time, whether due to changing seasonal heating or to some other mechanism.

From the Voyager encounters in 1980 and 1981, we know that each of Saturn's icy moons possesses intriguing features. Enceladus is the most reflective body in the solar system; both Mimas and Tethys exhibit large craters on their surfaces; Dione and Rhea have curious streaks of bright, wispy material. Cassini will make very close approaches to Rhea, Dione and Enceladus, returning images in which features as small as 50 metres or less will be detectable. Images with details finer than those seen by Voyager (~ 2 km) will be returned from all five moons.