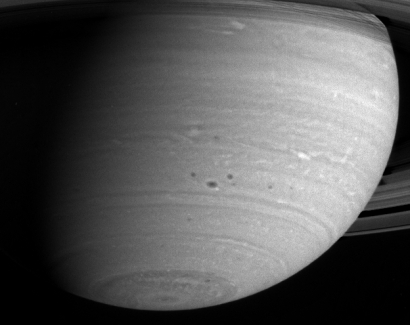 This close-up of Saturn's southern hemisphere shows several dark spots huddled in the mid-latitude region. The largest of these spots is about 3000 kilometres across, or about as wide as Japan is long. Also visible are light-coloured, lacy cloud patterns indicative of atmospheric turbulence. The image was taken with the Cassini narrow angle camera through a near-infrared filter on 7 May 2004, from a distance of 28.2 million kilometres from Saturn. Image scale is 168 kilometres per pixel. The image has been contrast-enhanced to aid visibility.