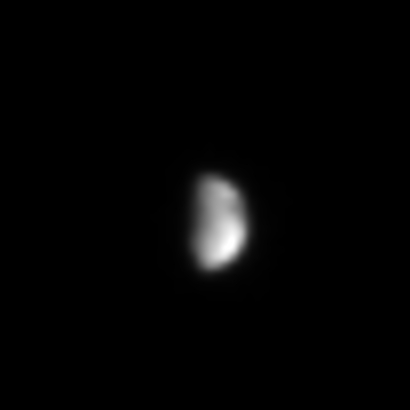 This Cassini image hints at the split personality of Saturn's 1436 kilometre-wide moon Iapetus. The Voyager spacecraft first imaged this curious yin/yang moon, with its light and dark hemispheres. The dark hemisphere is the side of Iapetus that leads in its orbit. In this view, both light and dark areas are visible.

The image was taken in visible light with the narrow angle camera on 23 May 2004, from a distance of 20.2 million kilometres from Iapetus. The image scale is 12 kilometres per pixel. The image was magnified to aid visibility.