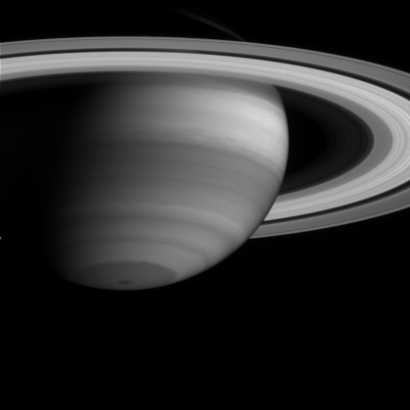 In this narrow angle camera image, dark regions represent areas where Cassini is seeing to deeper levels in Saturn's atmosphere. The dark regions are relatively free of high clouds and the light at these particular near-infrared wavelengths (centred at 727 nanometres) penetrates into the gaseous cloud-free atmosphere and is absorbed by methane. The image was taken with the narrow angle camera on 15 May 2004, from a distance of 24.7 million kilometres from Saturn. The image scale is 147 kilometres per pixel. Contrast in the image was enhanced to aid visibility.