ESA Science & Technology - Saturn's A Ring From the Inside Out 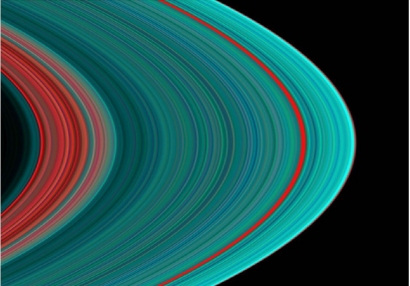 The best view of Saturn's rings in the ultraviolet indicates there is more ice toward the outer part of the rings, than in the inner part, hinting at the origins of the rings and their evolution.

Images taken during the Cassini spacecraft's orbital insertion on 30 June 2004 show compositional variation in the A, B and C rings. From the inside out, the "Cassini Division" in faint red at left is followed by the A ring in its entirety. The Cassini Division at left contains thinner, dirtier rings than the turquoise A ring, indicating a more icy composition. The red band roughly three-fourths of the way outward in the A ring is known as the Encke gap.

The ring system begins from the inside out with the D, C, B and A rings followed by the F, G and E rings. The red in the image indicates sparser ringlets likely made of "dirty," and possibly smaller, particles than in the icier turquoise ringlets.