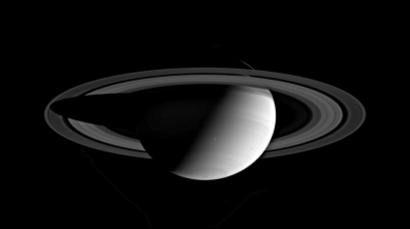 Two weeks after orbit insertion, Cassini glanced back at Saturn, taking in the entire planet and its expansive rings. Currently it is summer in Saturn's southern hemisphere. Notable here is the bright spot located near the planet's southern hemisphere, where the line from the day and night side of the planet meets. The angle of illumination hints at Saturn's tilt relative to the Sun.

The image was taken in visible red light with the Cassini spacecraft wide angle camera on 13 July 2004, from a distance of about 5 million kilometres from Saturn. The Sun-Saturn-spacecraft, or phase angle of this image is 95 degrees. The image scale is 299 kilometres per pixel. Contrast has been enhanced slightly to aid visibility.