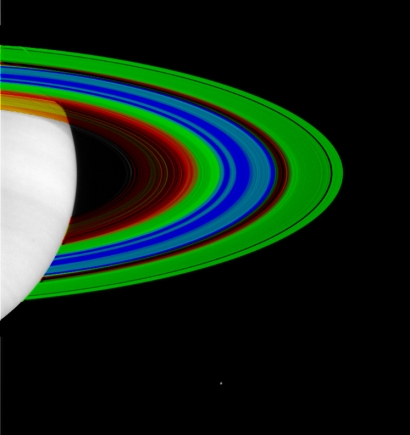 The varying temperatures of Saturn's rings are depicted here in this false-colour image from the Cassini spacecraft.

This image represents the most detailed look to date at the temperature of Saturn's rings. The image was made from data taken by Cassini's composite infrared spectrometer instrument.

Red represents temperatures of about 110 Kelvin, and blue 70 Kelvin. Green is equivalent to 90 Kelvin. Water freezes at 273 Kelvin. The spatial resolution of the ring portion of the image is 200 kilometres.

The data show that the opaque region of the rings, like the outer A ring (on the far right) and the middle B ring, are cooler, while more transparent sections, like the Cassini Division (in red just inside the A ring) or the inner C ring (shown in yellow and red), are relatively warmer.