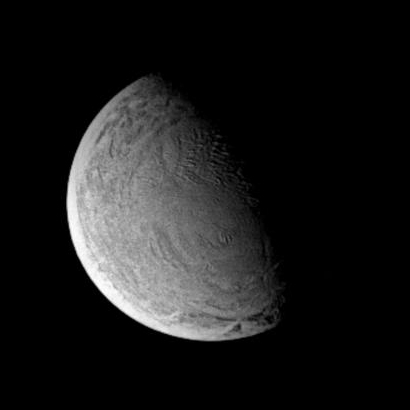 This Cassini image of Saturn's moon Enceladus shows a region containing bizarre, wrinkled terrain. Enceladus is covered with bright water ice. The part of its surface visible here appears to be largely free of craters, indicating that it is geologically young. Enceladus has a diameter of 499 kilometres.

This view shows primarily the leading hemisphere of Enceladus. The image has been rotated so that north on Enceladus is up.

The image was acquired with the Cassini spacecraft narrow angle camera on 15 January 2005, at a distance of approximately 367 000 kilometres from Enceladus and at a Sun-Enceladus-spacecraft, or phase, angle of 74 degrees. A combination of spectral filters sensitive to infrared and polarized light was used to obtain this view. Resolution in the original image was about 2 kilometres per pixel. The image has been contrast-enhanced and magnified by a factor of two to aid visibility.