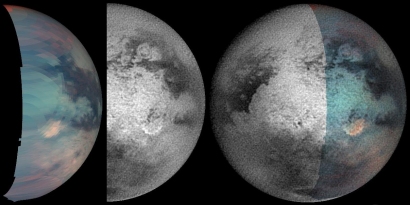 The recently discovered infrared-bright spot on Titan is the type of enigmatic feature that is best investigated by putting together as many different types of complementary information as possible. This montage shows the spot in infrared wavelengths from the visual and infrared mapping spectrometer (VIMS) on the left, from the imaging science subsystem (ISS) in the centre, and a combination of both data sets on the right.

When put together, the two different views show more than either does separately. The visual and infrared spectrometer team noted the bright region in the image on the left after Cassini's 31 March 2004, Titan encounter. The strange, bright feature to the southeast of Xanadu was flagged as unusual and informally dubbed "The Smile" by imaging team members in December 2004. Together the images show that The Smile (seen by the imaging cameras at 0.938 μm) bounds the infrared "Bright, Red Spot" toward the southeast. The bright region seen in the visible and infrared mapping spectrometer image extends several hundred kilometres to the north and west of The Smile, but does not cover the dark terrain located between this area and Xanadu farther to the northwest. The Smile feature also seems to extend farther west at the south end than the Bright, Red Spot.

It seems clear that both instruments are detecting the same basic feature on Titan's surface. This bright patch may be due to an impact event, landslide, cryovolcanism, or atmospheric processes. Its distinct colour and brightness suggest that it may have formed relatively recently.

The false-colour image on the left was created using images taken at 1.7 μm (represented by blue), 2.0 μm (green), and 5.0 μm (red). The images that comprise this view were taken by the visual and infrared mapping spectrometer instrument on the 16 April 2005, Titan flyby. Several views were stitched together to make a mosaic. The result was then reprojected to simulate the view from the imaging camera so that the two could be directly compared.

The centre image was taken by the narrow-angle camera on 10 December 2004, using a spectral filter centred at 0.938 μm (938 nanometres). The image was taken at a distance of 1.5 million kilometres from Titan and has a pixel scale of 9 kilometres per pixel. The image is centred on 8 degrees south latitude, 112 degrees west longitude. This image has been contrast enhanced and sharpened to improve surface feature visibility.