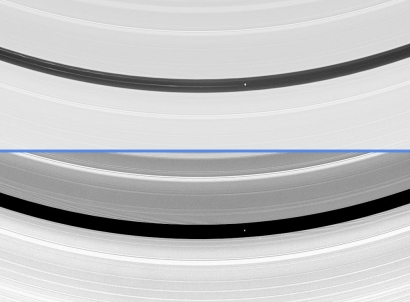 Saturn's moon Pan is seen here orbiting within the Encke Gap in Saturn's A ring in two differently processed versions of the same Cassini image. The little moon is responsible for clearing and maintaining this gap, named for Johann Franz Encke, who discovered it in 1837. Pan is 20 kilometres across.

The top image reveals two of the faint, dusty ringlets that occupy the gap along with Pan. One of the ringlets occupies nearly the same orbit as Pan, while the other is closer to the gap's inner edge. Not only do the ringlets vary in brightness, but they also appear to move in and out along their length, resulting in notable kinks, which are similar in appearance to those observed in the F ring. One possible explanation for the complex structure of the ringlets is that Pan may not be the only moonlet in this gap.

Pan is responsible for creating stripes, called wakes, in the ring material on either side of it. Since ring particles closer to Saturn than Pan move faster in their orbits, these particles pass the moon and receive a gravitational kick from Pan as they do. This kick causes waves to develop in the gap where the particles have recently interacted with Pan, and also throughout the ring, extending hundreds of kilometres into the rings. These waves intersect downstream to create the wakes, places where ring material has bunched up in an orderly manner thanks to Pan's gravitational kick.

In the bottom image, the bright stripes or wakes moving diagonally away from the gap's edges can be easily seen. The particles near the inner gap edge have most recently interacted with Pan and have just passed the moon. Because of this, the disturbances caused by Pan on the inner gap edge are ahead of the moon. The reverse is true at the outer edge: the particles have just been overtaken by Pan, leaving the wakes behind it.

This image was taken in visible light with the Cassini spacecraft narrow-angle camera on 18 May 2005, at a distance of approximately 1.6 million kilometres from Pan and at a Sun-Pan-spacecraft, or phase, angle of 44°. The image scale is 9 kilometres per pixel.