Titan Beyond the Rings

Titan Beyond the Rings 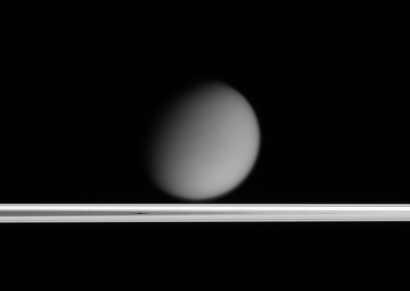 Saturn's hazy moon Titan appears to drift above Saturn's ring plane in this view taken only a 10th of a degree above the rings. Titan's small orbital inclination is enough to make it appear above the ring plane from this viewing angle. Titan is 5150 kilometres across.

The Sun is below the rings in this image, so light that makes it to Cassini is that which has been diffusely transmitted through the rings. Thus, the densest parts of the rings appear dark in this image, and the dusty gaps in the rings, such as the Cassini Division, appear bright.

The image was taken in visible light with the Cassini spacecraft narrow-angle camera on 25 March 2005, at a distance of approximately 3.2 million kilometres from Titan and at a Sun-Titan-spacecraft, or phase, angle of 50 degrees. The image scale is 19 kilometres per pixel.