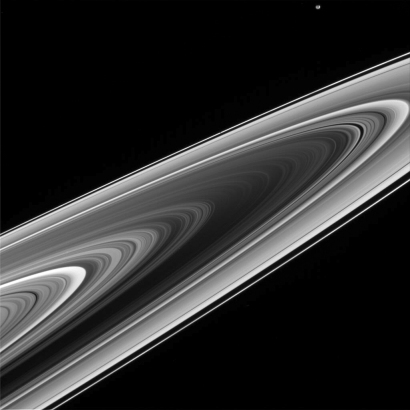 Cassini's climb to progressively higher elevations reveals the "negative" side of Saturn's rings. As the Sun shines through the rings, they take on the appearance of a photonegative: the dense B ring (at the centre) blocks much of the incoming light, while the less dense regions scatter and transmit light.

Close inspection reveals not one, but two moons in this scene. Mimas (397 kilometres across) is easily visible near the upper right, but the shepherd moon Prometheus (102 kilometres) can also be seen. Prometheus is a dark spot against the far side of the thin, bright F ring. Most of Prometheus' sunlit side is turned away from Cassini in this view.

The image was taken in visible light with the Cassini spacecraft wide-angle camera on 15 April 2005 at a distance of approximately 570 000 kilometres from Saturn. The image scale is 30 kilometres per pixel.