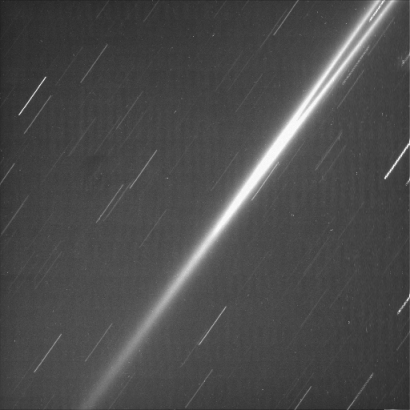 Cassini's ability to remain sharply pointed at its targets allowed this image of Saturn's faint, dusty G ring to be made. The thin streaks visible here are star trails, which are created during long exposures, when the spacecraft remains locked onto a target. The camera shutter was open for three-and-a-half minutes during this particular exposure. A long exposure was required to see details of this quite tenuous ring.

The feature inside the G ring, at upper right, is also a star trail.

The image was taken in polarized visible light with the Cassini spacecraft narrow-angle camera on 7 March 2005 at a distance of approximately 1.2 million kilometres from Saturn. The image scale is 10 kilometres per pixel.