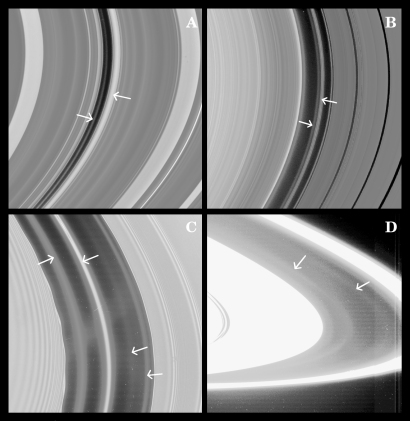 Cassini images have revealed the presence of previously unseen faint rings in some of the gaps in Saturn's rings -- possible indicators of small yet-unseen moons.

Image B is a view of the approximately 350-kilometre-wide Huygens gap, between the outer edge of Saturn's B ring (on the left) and the dark bands (on the right) in the Cassini division. The right arrow points to the optically thick Huygens ring; the left arrow points to the new diffuse ring inside it.

Image C is a view of the ringlets inside the Encke gap. Some of these had been seen by NASA's Voyager spacecraft, but this contrast-enhanced Cassini lit-side image shows the presence of three major ringlets and a rather tenuous one.

The centre ringlet, which in this image has the highest optical depth among the ringlets, is coincident with Pan's orbit. This finding, along with observed variations in brightness along the ringlet, implies that accumulations of particles in the ringlet are maintained in special orbits that prevent them from colliding with Pan.

In Image D, which is a composite of several wide angle images taken of the lit-side of the rings after orbit insertion, there is clear indication of material extending about 400 kilometres beyond the edge of Saturn's overexposed A ring (on the right), as well as two diffuse rings: a 300-kilometre-wide ring of material, R/2004 S1, in the orbit of Atlas (left-most arrow) and another ring, R/2004 S2, comparable to the Atlas ring and immediately interior to Prometheus's orbit (right-most arrow). These rings had been reported earlier and are comparable to the jovian ring. Prometheus's orbit is elliptical, and brings the moon as close to Saturn as the outer edge of R/2004 S2 and as far away from the planet as the inner sharp boundary of Saturn's F ring. These observations indicate that Prometheus has swept material from the region occupied by its orbit.

It is not clear yet whether the origin of all these low-optical depth ringlets is the same. The association of the Atlas ring with Atlas and the main Encke ringlet with Pan would suggest that these rings derive from their associated moon. In other cases, a ring may exist because the material (or small parent bodies within it) are shepherded by a larger moon also present in the gap. The particles in many or all of these diffuse ringlets may have substantial fractions of micrometer-sized dust, implying that non-gravitational forces also may affect the ringlets' dynamics. In any case, the presence of narrow, diffuse ringlets in gaps like Maxwell and Huygens, along with the major Maxwell and Huygens ringlets, and the additional narrow ringlets in the Encke gap, suggests that there may be yet unseen moonlets in these gaps.