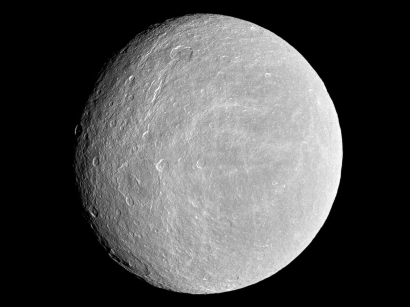 The Cassini spacecraft looks toward the cratered plains of the trailing hemisphere of Rhea.

Some of the moon's fractures, appearing like wispy bright lines, can be seen on the left of the image. Rhea's north pole is up and rotated 3 degrees to the right. The moon is 1528 kilometers across.

The image was taken in visible light with the Cassini spacecraft wide-angle camera on 21 November 2009. The view was obtained at a distance of approximately kilometers from Rhea and at a Sun-Rhea-spacecraft, or phase, angle of 27 degrees. Image scale is 2 kilometers per pixel.