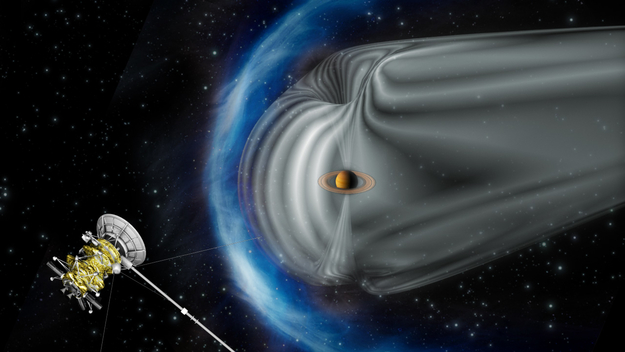 The international Cassini spacecraft exploring the magnetic environment of Saturn. The image is not to scale. Saturn’s magnetosphere is depicted in grey, while the complex bow shock region – the shock wave in the solar wind that surrounds the magnetosphere – is shown in blue. While crossing the bow shock on 3 February 2007, Cassini recorded a particularly strong shock (an Alfvén Mach number of approximately 100) under a 'quasi-parallel' magnetic field configuration, during which significant particle acceleration was detected for the first time. The findings provide insight into particle acceleration at the shocks surrounding the remnants of supernova explosions.