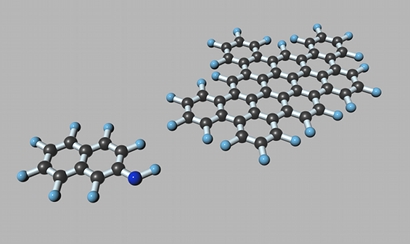 This image shows two Polycyclic Aromatic Hydrocarbons (PAHs) that were identified as the most likely abundant PAHs in the atmosphere of Titan, Saturn's largest moon. PAHs are large carbon-based molecules that form from the aggregation of smaller hydrocarbons: the carbon atoms are arranged in the typical ring-like structure of aromatic compounds. Some of the PAHs detected in the atmosphere of Titan also contain nitrogen atoms. C10H8N is shown on the left and C48H22 on the right; carbon atoms are represented in black, hydrogen atoms in light blue and nitrogen atoms in dark blue.

Scientists studying the emission from various molecules in Titan's atmosphere detected an unexpected signal at wavelengths of about 3 microns. With the aid of the NASA Ames PAH IR Spectral Database, they could explain the data as emission by a mixture of many different PAHs, which contain an average of 34 carbon atoms and of 10 rings each. PAHs are very efficient in absorbing ultraviolet radiation from the Sun, redistributing the energy within the molecule and finally emitting it at infrared wavelengths.

The PAHs themselves are a product of photoionisation of smaller molecules in the upper atmosphere of Titan, and are the first step in a sequence of increasingly larger compounds. Models show how PAHs can coagulate and form large aggregates, which tend to sink, due to their greater weight, into the lower atmospheric layers, leading to the eventual formation of aerosols that make up the haze blanketing Titan's surface.