A ring of colour around Saturn's moon Titan

A ring of colour around Saturn's moon Titan 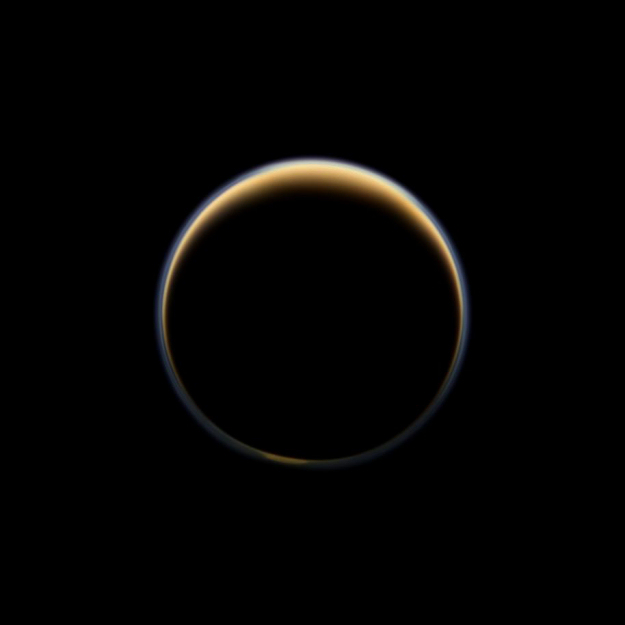 The existence of an ionosphere high above the surface of Titan has been known since it was first observed by radio occultation measurements from the Voyager 1 spacecraft in November 1980. However, most of our knowledge about the moon's ionosphere has been established following the entry of the Cassini spacecraft into orbit around Saturn in July 2004. Since then, regular flybys have provided opportunities for in situ studies of the environment of this moon.

A detailed analysis of data obtained with the Langmuir probe instrument, part of the radio and plasma wave science instrument on board Cassini, has confirmed predictions that the density of Titan's ionosphere is directly linked to the 11-year solar cycle.

In this image, taken with the Cassini wide-angle camera on 6 June 2012, the spacecraft looks toward the night side of Titan and sees sunlight scattering through the periphery of Titan's atmosphere and forming a ring of colour. The natural colour view of Titan was produced with images taken using red, green and blue spectral filters. The spacecraft was at a distance of approximately 216 000 kilometres from Titan. Image scale is 13 kilometres per pixel. This view looks toward the Saturn-facing side of Titan. North on Titan is up and rotated 9 degrees to the right.

The Cassini–Huygens mission is a cooperative project of NASA, ESA and the Italian Space Agency (ASI). NASA's Jet Propulsion Laboratory, a division of the California Institute of Technology in Pasadena, manages the mission for NASA's Science Mission Directorate, Washington, D.C. JPL also manages the Voyager mission for NASA.