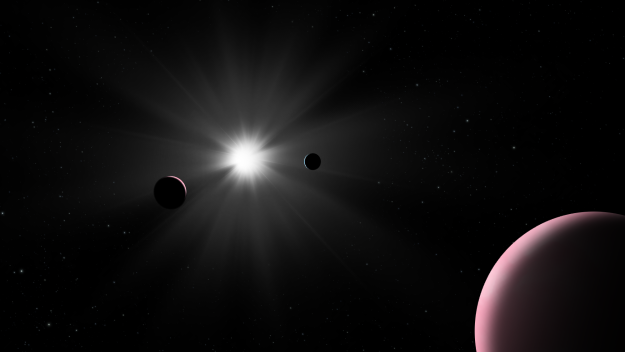 This bright, Sun-like star is located just under 50 light-years away from Earth in the constellation of Lupus (the Wolf), and is known to host three planets – named 'b', 'c' and 'd', with the star deemed to be object 'A' – with masses between those of Earth and Neptune and orbital periods lasting 11.6, 27.6 and just over 107 days. The inner two of these planets were found to cross the face of their star as seen from Earth, an event known as a transit. Transits create the valuable opportunity to study a planet's atmosphere, orbit, size and interior, and allow scientists to compare multiple planets around the same star to understand how they have formed and evolved over time.

While exploring these two transiting planets, CHEOPS spied something unexpected and exciting: the third and outermost planet, Nu2 Lupi d, also completing a transit. The discovery is one of the first results from CHEOPS, and the first time an exoplanet with a period of over 100 days has been spotted transiting a star bright enough to be visible to the naked eye.

Using the high-precision capabilities of CHEOPS, planet d was found to be about 2.5 times the radius of Earth, confirmed to take 107.2 days to loop once around its star and, using archival observations from ground-based telescopes, found to have a mass of 8.8 times that of Earth. The mission also characterised the amount of radiation reaching the planet's surface – in the Solar System, Nu2 Lupi d would orbit between Mercury and Venus in terms of stellar radiation – and estimated its composition to be watery. A quarter of its mass is water (albeit in the form of high-pressure ice or high-temperature steam), compared to less than 0.1% for Earth.