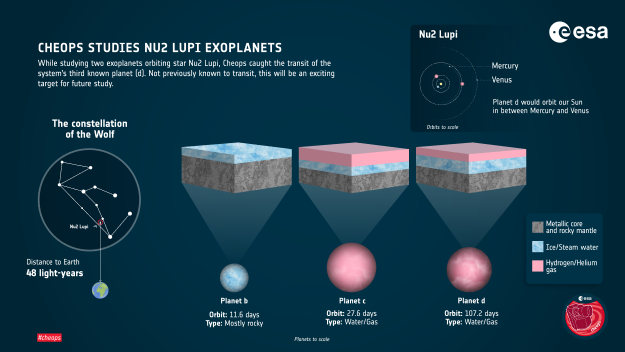 This infographic reveals the details of the Nu2 Lupi planetary system, which was recently explored by ESA's exoplanet watcher CHEOPS (CHaracterising ExOPlanet Satellite).

This bright, Sun-like star is located just under 50 light-years away from Earth in the constellation of Lupus (the Wolf), as shown to the left of the frame, and is known to host three planets (named 'b', 'c' and 'd', with the star deemed to be object 'A'). The relative sizes, orbital periods, and possible compositions of these three planets are depicted to the centre and lower right of the frame, while planet d's comparative position within our Solar System is shown to the upper right (as defined by the amount of incident light it receives from its star, Nu2 Lupi).

CHEOPS explored this planetary system to better characterise its two inner planets, b and c, as these were known to pass in front of their host star (a 'transit'). However, while doing so, CHEOPS unexpectedly spotted planet d also transiting Nu2 Lupi – the first time an exoplanet with a period of over 100 days has been spotted transiting a star bright enough to be visible to the naked eye.

Transits create the valuable opportunity to study a planet's atmosphere, orbit, size and interior, and allow scientists to compare multiple planets around the same star to understand how they have formed and evolved. The transiting behaviour of all three planets of the Nu2 Lupi system enabled CHEOPS to refine the planetary characteristics and compositions depicted here.