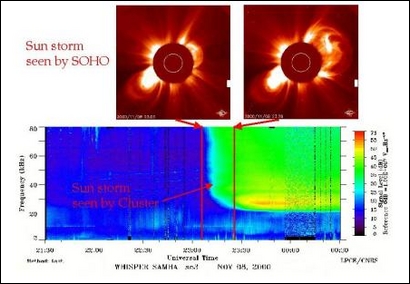 Seen by Soho and Cluster Samba spacecraft (WHISPER data from P. Decreau, LPCE, France). Soho took two images, one at the beginning and the other in the middle of the storm on the Sun. The ejection is on the right side of the figure. Samba data show the electromagnetic radiation produced by the storm arriving about 8 minutes later.
28-Oct-2021 11:43 UT