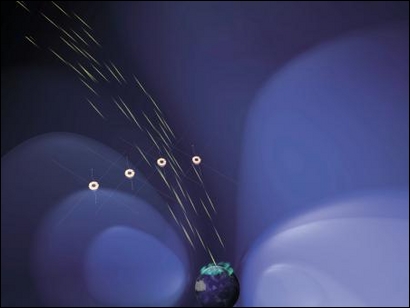 The European Space Agency's Cluster mission is providing scientists with their most detailed view of the interaction between the Sun and Earth. As they stream past the Earth, some of the charged particles in the solar wind penetrate Earth's magnetosphere - the region of space dominated by our planet's magnetic field.

These particles break through Earth's magnetic defences at weak points known as the cusps. There, the particles cascade down the magnetic field lines and collide with the upper atmosphere, generating beautiful auroras (the Northern and Southern Lights) over the polar regions.

At times the four Cluster spacecraft sweep through the cusp in a 'string of pearls' formation. This image shows one spacecraft in the centre of the cusp and the others at various locations towards the edge or outside it. By comparing data from each spacecraft, scientists are able to study for the first time small-scale variations in one of the most important regions of the magnetosphere.