Data plots from the CIS instrument

Data plots from the CIS instrument 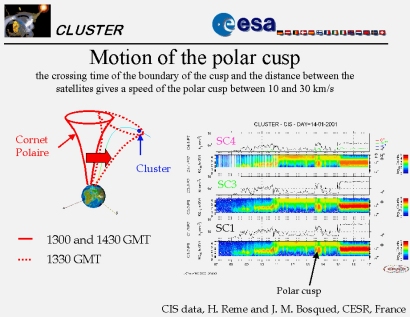 These data plots from the CIS experiment on three Cluster spacecraft show the measured population of ions (charged particles) with energy from about 30 eV up to about 30 KeV between 07 and 17 GMT on 14 January 2001. The polar cusp was encountered between 13:30 and 13:50. Detailled comparison of the data on the different spacecraft indicates that the polar cusp was moving toward the Cluster spacecraft at a speed between 10 and 30 kms-1. The motion of the cusp in relation to Cluster is shown on the left.
17-Oct-2021 09:07 UT