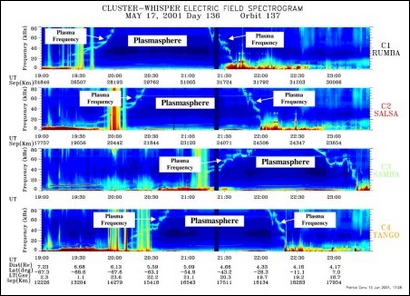 Four data plots from the Whisper electrical waves instrument on each Cluster spacecraft.

These frequency/time spectrograms were obtained when each of the Cluster spacecraft, coming close to perigee, encountered the dense plasmasphere at different times. The increase in density is shown by the rise in the plasma frequency, a wave signature seen here as a pale blue line, which depends only on the electron density of the plasma surrounding the spacecraft.

The large spatial separation between the four spacecraft meant that their encounters with the plasmasphere took place at very different times. Rumba arrived first, then Salsa at about 19:45 UT, Tango at about 20:15 UT, and finally Samba around 21:00 UT.

Differences in the density profiles can also be seen, the most striking one being the shoulder observed by Samba at 23:00 UT, as it exited the plasmasphere. The strong (red) emissions observed at low frequency - below 10 kHz - before and after each spacecraft encountered the plasmasphere, are known as whistler waves. The strong (yellow/red) vertical bars observed while the plasma frequency was increasing (for example at 20:00 UT for Salsa) are interferences.