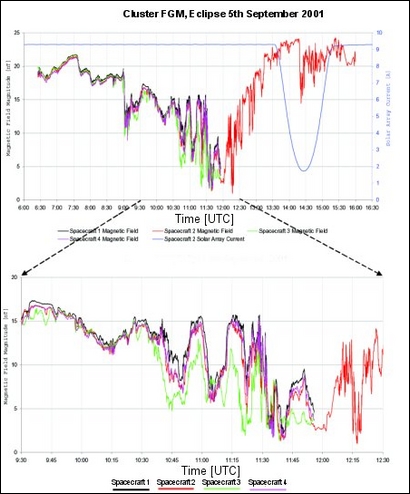 These plots show data obtained from the FGM (magnetometer) instruments as the four Cluster spacecraft passed through the plasma sheet the central region of the Earths magnetic tail on 5 September 2001.

On this occasion, the Cluster quartet crossed the plasma sheet before entering the eclipse. Data from all four spacecraft (available to 12:00 UT about 3.5 hours before the eclipse started) show the dropouts in the magnetic field characteristic of the complex structure of the plasma sheet and the strong electrical currents that flow in it.

It can be clearly seen that Cluster crossed these structures from the way the magnetic field data from the four instruments track each other, except for some significant differences with spacecraft 3 (Samba), which was flying a little south of the other three at the time.

When the eclipse came, Cluster was already in the southern 'suburbs' of the central plasma sheet, as can be seen from the strength of the magnetic field from spacecraft 2, the only spacecraft which was scheduled to return magnetic field data at that time. The smaller disturbances at the time of the eclipse are almost certainly parts of the tail plasma sheet and not due to lack of sunlight at the time.