Partial mapping of the current density in the ring current region

Partial mapping of the current density in the ring current region 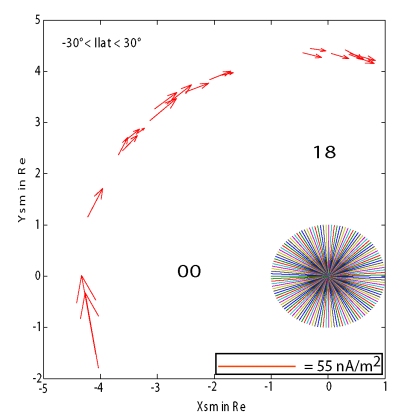 During 5 months (February - June 2002), the Cluster satellites stayed in the same geometrical configuration. Analysis of all ring current crossings allowed to establish the first partial mapping of the current density in the ring current region, based on 4 simultaneous points of measurements, under various geomagnetic activity levels.

This plot shows the current density vectors extracted from 19 Cluster perigee passes in the February-June 2002 timeframe, averaged in a ± 30° invariant latitude interval around the equatorial plane, and projected down to the equator. The Earth is indicated by the filled circle at the origin of the plot (radius = 1 Re). Various magnetic activity levels are included. (Figure 15b of [Vallat et al., 2005])