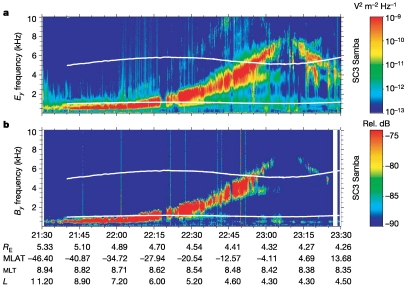 Waves observed by the Cluster spacecraft. Data from the Wideband (WBD) plasma wave instrument on one of the four Cluster spacecraft (Samba) is shown for 31 October 2003. The wave electric field Ey transverse to the ambient magnetic field is shown in a, and wave magnetic field By in b. The colour bars on the right give the calibrated wave power spectral density for the wave electric field (a), and relative wave power spectral density (in dB) for the wave magnetic field (b).
View »
5-Feb-2023 14:42 UT