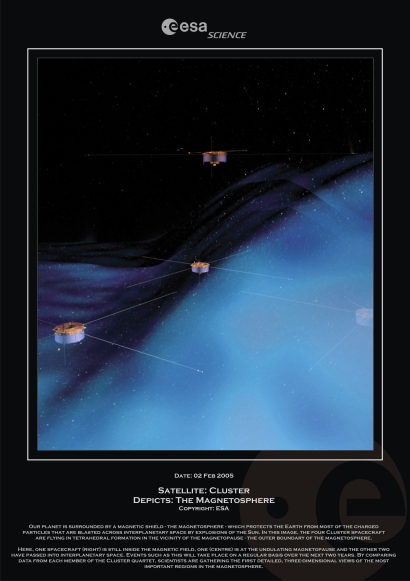 Our planet is surrounded by a magnetic shield - the magnetosphere - which protects the Earth from most of the charged particles that are blasted across interplanetary space by explosions of the Sun. In this image, the four Cluster spacecraft are flying in tetrahedral formation in the vicinity of the magnetopause - the outer boundary of the magnetosphere.

Here, one spacecraft (right) is still inside the magnetic field, one (centre) is at the undulating magnetopause and the other two have passed into interplanetary space. Events such as this will take place on a regular basis over the next two years. By comparing data from each member of the Cluster quartet, scientists are gathering the first detailed, three-dimensional views of the most important regions in the magnetosphere.