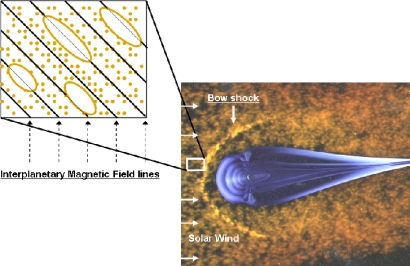 The right-hand side figure represents the Earth's magnetosphere surrounded by solar wind plasma constantly flowing out of the Sun (coming from the left side of the figure). The white rectangle symbolises where the recent observations have been performed by the Cluster and Double Star satellites: in the solar wind, upstream of the Earth's bow shock (yellow arc).

The left-hand side cartoon illustrates these observations. Brown dots represent the solar wind and ions backstreaming against the solar wind flow, along the Interplanetary Magnetic Field (IMF) lines (black lines). Elongated ellipses, along the IMF, represent the new type of plasma density holes discovered. Within these density depletions, the magnetic field strength is greatly reduced, almost to zero, which is emphasized by thinner lines within the holes.