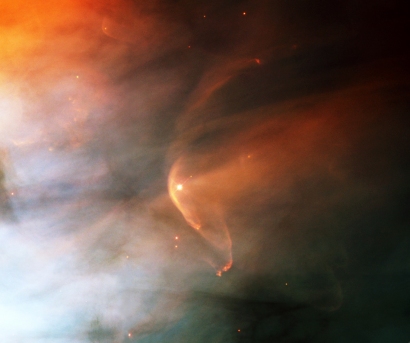 Bow shock around the very young star LL Ori, located in the intense star-forming region known as the Great Nebula in Orion. A bow shock can be created in space when two streams of gas collide. LL Ori emits a vigorous stellar wind, a stream of charged particles moving rapidly outward from the star. This stellar wind collides with slow-moving gas evaporating away from the center of the Orion Nebula, which is located to the lower left in this image. The surface where the two winds collide is the crescent-shaped bow shock seen in the image. A second, fainter bow shock can also be seen around a star near the upper left-hand corner of the image.
View »
5-Feb-2023 13:55 UT

Cluster reveals the reformation of the Earth's bow shock