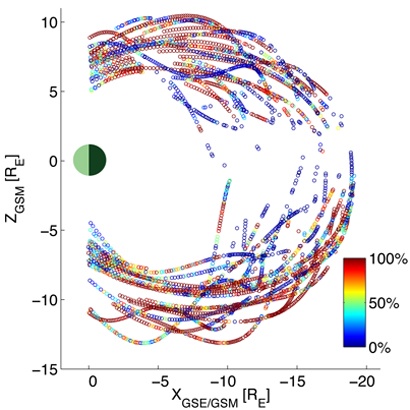 By applying a new analytical method to a unique set of electric field data collected by instruments onboard the Cluster mission, it has been possible to quantify the amount of hydrogen naturally escaping each year from the Earth's atmosphere. This hydrogen outflow has been shown to be of the order of thousands of tons. The escaping hydrogen has previously been invisible to classical particle detectors on satellites due to its very low energy. For further details see Engwall et al., 2009.

The figure above shows parts of Cluster orbits with geocentric distances over 5 RE from the Earth, for which the method of Engwall et al., (2009) was used to detect cold ions. Each point in the graph corresponds to 10 minutes of data. The colour shows the relative occurrence of cold ions. The data are from Cluster number 3 between July and October 2002.