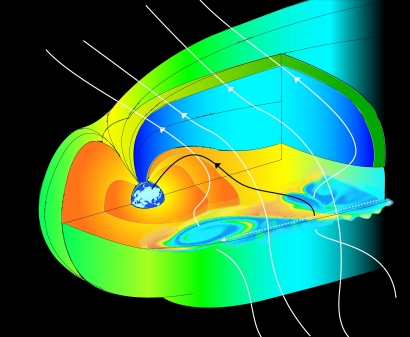 This figure shows a three-dimensional cut-away view of Earth's magnetosphere. The curly features sketched on the boundary layer are the Kelvin-Helmholtz vortices discovered by Cluster. They originate where two adjacent flows travel with different speed. In this case, one of the flows is the heated gas inside the boundary layer of the magnetosphere, the other the solar wind just outside it. The arrows show the direction of the magnetic field; in white the direction associated with the solar wind and in black the one inside Earth's magnetosphere. The white dashed arrow shows the trajectory followed by Cluster.
View »
6-Feb-2023 15:13 UT