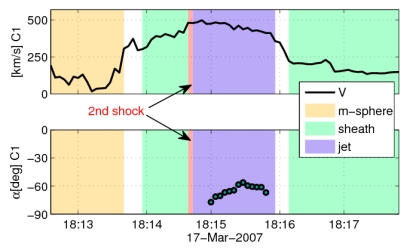 Top panel: total plasma speed measured by one of the Cluster satellites (C1) on 17 March 2007 from 18:13 to 18:17 UT. The plasma regions crossed by the satellite on its way out of the magnetosphere are colour coded as follows: yellow (magnetosphere), green (magnetosheath), pink (2nd shock) and purple (jet). The lower panel displays the angle (α) between the upstream plasma velocity and the normal to the bow shock, located upstream of the second shock. The calculation is not expected to be valid at the edges of the jet where the shock is weak and hence α is shown for the centre only.
18-Oct-2021 20:23 UT