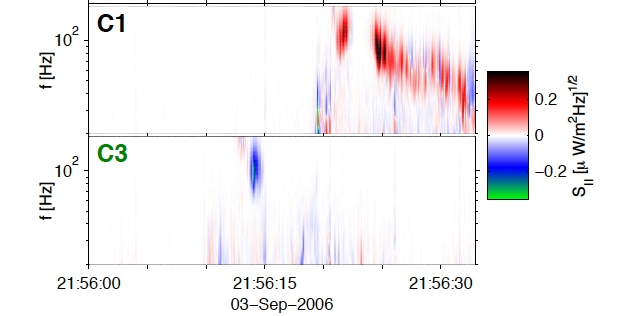 In situ measurements of plasma flows, obtained with the four Cluster spacecraft, have made it possible to pinpoint the mechanism responsible for the acceleration of energetic particles in the plasma sheet.

High time resolution measurements were crucial for demonstrating the presence of electromagnetic waves and their role in betatron acceleration. The observation of whistler waves provided the smoking gun evidence for the presence of a magnetic field pileup. This pileup has been shown to drive the particle acceleration.

This figure shows the observed intensity of whistler mode waves measured between 20 Hz and 200 Hz. The same intensity bubble at around 100 Hz is observed by the Cluster C3 spacecraft at 21:56:15 and 5 seconds later by the C1 spacecraft. During this time the spacecraft were above (C1) and below (C3) the plasma sheet.