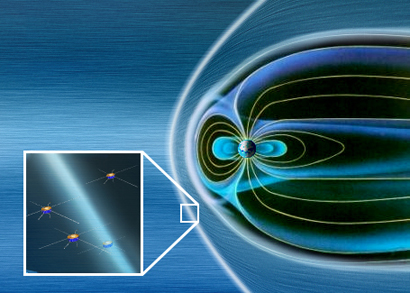 This artist's impression shows the four spacecraft of ESA's Cluster mission investigating the magnetic environment of the Earth.

A favourable crossing by the spacecraft through our planet's bow shock has enabled space physicists to obtain pioneering measurements of the thickness of this transition layer. The crossing took place on 9 January 2005. These data have shown that the bow shock, a standing shock wave that forms when the solar wind encounters the magnetosphere of our planet, is remarkably thin – only about 17 kilometres across. Such a sharp transition is close to the limit set by wave dispersion and could hardly be any steeper, implying that the shock layer is as thin as it can be.

The thickness of the bow shock is a crucial parameter in investigating the physical processes taking place within that region. Thin astrophysical shocks such as this are candidate sites for early phases of particle acceleration. The finding thus sheds new light on the much debated issue of particle injection in the context of cosmic ray acceleration.