Shocks across the Universe

Shocks across the Universe 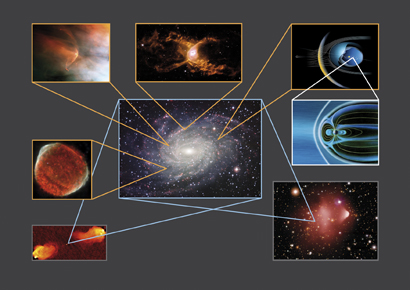 This composition shows a number of diverse astronomical sources where shocks have been detected. Shock waves arise when supersonic flows of plasma are faced with an obstacle, such as a planet or a star with a magnetic field, or when they encounter a slower moving flow.

These abrupt transitions between supersonic and subsonic flows have been observed on a variety of cosmic scales, most notably in stellar winds gusting from young and massive stars, in the shell-like remnants of supernova explosions, in the proximity of the lobes and jets emanating from radio galaxies and in the hot gas filling clusters of galaxies. Observations at radio frequencies, as well as in X-rays and gamma rays, have revealed that shocks are also intimately connected to the origin of cosmic rays, the most energetic particles in the Universe.

Depicted in the composition are: a bow shock around the very young star, LL Ori, in the Great Orion Nebula (upper row, left image); shock waves around the Red Spider Nebula, a warm planetary nebula (upper row, central image); very thin shocks on the edge of the expanding supernova remnant SN 1006 (central row, left image); artist's impressions of the bow shock created by the Solar System as it moves through the interstellar medium of the Milky Way (upper row, right image) and of Earth's bow shock, formed by the solar wind as it encounters our planet's magnetic field (central row, right image); shock-heated shells of hot gas on the edge of the lobes of the radio galaxy Cygnus A (lower row, left image); a bow shock in the hot gas in the merging galaxy cluster 1E 0657-56, also known as the 'Bullet Cluster'.

The image of a galaxy (NGC 6744) in the centre of the composition serves to give a rough idea of the relative scales, sub- and super-galactic alike, of the shock waves present across the Universe.