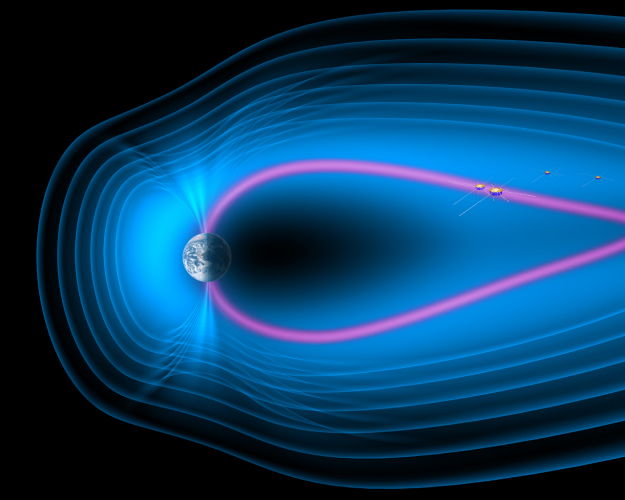 This illustration shows the magnetic environment of Earth, which arises from the interaction between the solar wind, a stream of electrically charged particles released by the Sun, and our planet's internal magnetic field. In fact, the magnetosphere acts as a shield that prevents most of the solar wind particles from infiltrating Earth's atmosphere.

In the illustration, the four spacecraft of ESA's Cluster mission are shown as they fly in the magnetotail, in the configuration they had on 31 August 2007: two of them were separated by only a few tens of kilometres and located in the thin boundary of the magnetotail, while the other two were much farther away. This was a very favourable event to probe the behaviour of plasma on the small scales where electrons become dominant. Using data from this event, scientists have for the first time characterised lower hybrid drift waves – plasma waves that develop in thin boundaries and play an important role in the dynamics of electrons and in the transfer of energy between different layers of plasma in Earth's magnetosphere.

Cluster looks into waves in the magnetosphere's thin boundaries