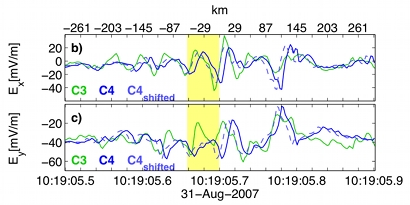 This graph shows the electric field as recorded by two of the four Cluster spacecraft on 31 August 2007, as they were flying through the plasma sheet boundary layer in the magnetotail, the long and cylindrical end of Earth's magnetosphere in the direction opposite to the Sun. During this event, the separation between the two spacecraft was no more than about 40 kilometres.

The oscillations of the electric field in the thin plasma boundary of the magnetotail have been interpreted in terms of lower hybrid drift waves, a particular type of plasma waves that develop in the presence of steep discontinuities in the plasma density and magnetic field strength. The yellow strip indicates an estimate of the wavelength of such waves, which was measured to amount to about 60 kilometres.

Cluster looks into waves in the magnetosphere's thin boundaries