The energy transferred by bursty bulk flows during a magnetic substorm

The energy transferred by bursty bulk flows during a magnetic substorm 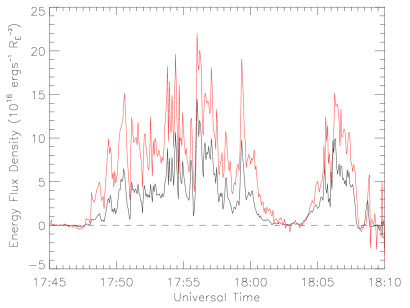 This graph illustrates the energy density flux in the Earthward direction during a magnetic substorm that occurred on 30 July 2002. On this occasion, one of the four Cluster spacecraft crossed the tail of the magnetosphere and the Cluster Ion Spectrometry (CIS) experiment detected a bursty bulk flow (BBF) streaming towards Earth at velocities up to 1800 km/s.

The MHD approximation, which treats all particles in the plasma as part of a single fluid, breaks down when scientists try to model collisionless plasma phenomena in Earth's magnetosphere. When the plasma is modelled in the kinetic approach, taking into account the velocity distribution of the individual particles besides the usual MHD parameters that describe the fluid – density, velocity and pressure – it becomes apparent that BBFs are more complex than previously thought and cannot be described as a single fluid.

The more accurate description achieved with the kinetic approach suggests that BBFs are more important than previously thought and can carry up to one third of the total energy transferred during a substorm.