Waves in the magnetic reconnection region

Waves in the magnetic reconnection region 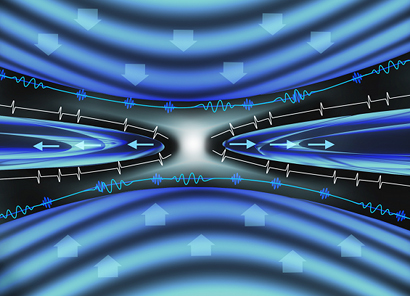 This illustration shows the configuration of a region, in the tail of Earth's magnetosphere, where magnetic reconnection is taking place. Two flows of plasma with anti-parallel magnetic fields are pushed together, flowing in from above and below, and create a thin current sheet. As plasma keeps flowing towards this sheet, particles are accelerated and eventually released via two symmetric jets to the left and right. This creates an X-shaped transition region, with a 'separatrix' region that divides the inflowing plasma from the outflows of highly energetic particles.

In situ measurements of electric and magnetic fields performed with ESA's Cluster mission have peered through the structure of the separatrix region and identified three different types of electrostatic waves that arise there. The data revealed that both low- and high-frequency waves – known as Electron-Cyclotron waves (represented in cyan in this illustration) and Langmuir waves (represented in blue), respectively – are present in the vicinity of the inflowing plasma. Single-pulsed waves called Electrostatic Solitary Waves (represented in white) are found closer to the outflowing plasma.

Resolving the structure of the separatrix region allows scientists to investigate the mechanisms underlying magnetic reconnection, as different types of waves are produced by particles with different properties.