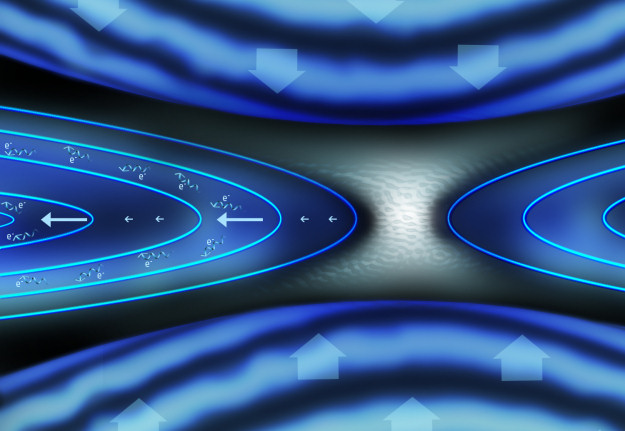 This illustration shows the configuration of a region, in the tail of Earth's magnetosphere, where magnetic reconnection is taking place. Two flows of plasma with anti-parallel magnetic fields are pushed together, flowing in from above and below. This creates a thin current sheet. As plasma continues to flow towards this sheet, particles are accelerated and eventually released via two symmetric jets: one towards Earth (to the left in the image) and another in the opposite direction.

Magnetic reconnection is an efficient mechanism to transfer the energy stored in the magnetic field to the kinetic energy of particles in the plasma. Scientists know that, in some circumstances, this phenomenon can accelerate electrons to very high energies. Using data from ESA's Cluster mission, scientists have discovered that the acceleration is a result of magnetic reconnection proceeding at an unsteady rate.

In this study, the scientists used data taken as the Cluster spacecraft were in the trajectory of the jet directed to Earth, so they could directly sample the plasma particles in situ and probe the properties of the jet. They noticed an interesting structure in this jet as it travelled towards Earth: firstly, it was not a single jet but two distinct ones, launched with a time difference of about 25 seconds. Secondly, as indicated in the illustration, each of the two Earthward jets showed a finer structure, with the bulk velocity of plasma increasing in the leading part of the jet (indicated by the long arrows) and decreasing in the following part (indicated by the small arrows).