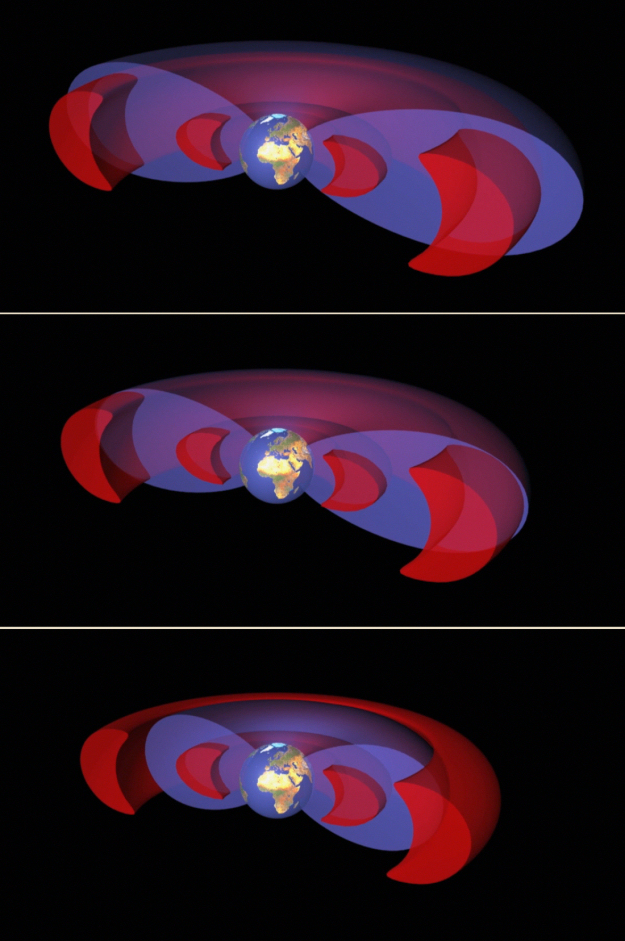 These three panels show how the relative locations of the outer boundary of the Earth's plasmasphere, the plasmapause, (shown in blue) and the van Allen belts (shown in red) change according to geomagnetic conditions.

The plasmasphere – the innermost part of the Earth's magnetosphere – is a doughnut-shaped region of low energy charged particles (cold plasma) centred around the planet's equator and rotating along with it. Its toroidal shape is determined by the magnetic field of Earth. The plasmasphere begins above the upper ionosphere and extends outwards, with the outer boundary varying (depending on geomagnetic conditions) from 4.5 Earth radii (RE) to 8 RE.

The two Van Allen radiation belts are concentric, tyre-shaped belts (shown in blue) of highly energetic (0.1–10 MeV) electrons and protons, which are trapped by the magnetic field and travel around the Earth. These radiation belts partly overlap with the plasmasphere. The inner Van Allen belt is located typically between 6000 and 12 000 km (1 - 2 Earth radii [RE]) above Earth's surface, although it dips much closer over the South Atlantic Ocean. The outer radiation belt covers altitudes of approximately 25 000 to 45 000 km (4 to 7 RE).

Both belts are separated from each other by an empty "slot" region. A temporary third belt (not shown in this image), between this slot and the outer main belt, was detected in 2013 by NASA's Van Allen Probes.

Data from the Cluster mission have shown that the position of the plasmapause – the outer boundary of the plasmasphere – is quite variable and, in addition, that the size of the slot region between the radiation belts varies with changes in geomagnetic conditions.

During periods of low geomagnetic activity (top panel) the plasmapause typically extends to around 6 RE , occasionally expanding beyond the boundary of the outer radiation belt, as far as 8 RE or even further. This result contrasts with previous studies based on observations from different spacecraft which indicated a correlation between the position of the plasmapause and the location of the inner edge of the outer belt.

During periods of higher geomagnetic activity (with moderate activity illustrated in the central panel and high activity in the lower panel) the plasmapause moves closer to the inner boundary of the outer belt, to around 4.5 RE. This behaviour is similar to that observed by previous studies. (Note that the outer radiation belt also moves, but at a slower rate, towards the Earth.)

The size of the slot region also varies with geomagnetic conditions, being wider during low geomagnetic activity.